We celebrated 25 years of operation in Marbella

At the shopping centre´s 25th anniversary, they celebrated the precinct´s historical role at the Costa del Sol and the loyal support shown by several businessmen since its opening

Late yesterday afternoon, there was a commemorative function to celebrate years since CENTRO PLAZA´s opening in Nueva Andalucia, and the successful life it has lead so far. The event was private, with a festive atmosphere, and was attended by 300 guests who have been linked to CENTRO PLAZA´s evolution over the years, as well as some members of the new local government in Marbella.

The precinct´s representatives, made up of a community team of tenants and owners, wanted to give a public thanks to all those who have made possible, “the centre´s respectable and prosperous career” of which they feel “proud”. They also highlighted some significant aspects of the multi-business´s past, present and future; elements which have lead CENTRO PLAZA to be considered “the model shopping centre for business and leisure in Nueva Andalucia, in Marbella and in the Costa del Sol”.

The event included the uncovering of two plaques that will serve as permanent, commemorative icons at the shopping centre. One highlights the 25th anniversary itself, whilst the other belongs to the Centre for Tourism Initiatives in Marbella (CIT) and the Spanish Association of Shopping Centres (AECC). Those responsible for showing the plaques to the public for the first time included: the new mayor of Marbella, José Bernal, the representative for Economic Development, PYMES, Health, Services and Employment, Ana Isabel González de la Torre, and the delegate for Youth and deputy mayor of Nueva Andalucia, Manuel Garcia. Later on, the mayor said a few words to the audience and wished CENTRO PLAZA a ‘happy birthday’ from the stage, emphasizing his hopes to fulfil another 25 years since “(…) projects like this have a future in Marbella”.

The architect who designed the building, Javier Banús, and the main pioneers of the shopping centre, Alfonso Fernández and Alberto Vidiella (the former was represented by his wife María Esther Huguet at the event) were also involved in the uncovering of the plaques. During the 25th anniversary celebration, these three received special mentions for their significant contributions to CENTRO PLAZA. Also present at this official moment were: the vice-president of the Malaga county council, Francisca Caracuel, president of CIT, Juan José González, and various other political members of the current local government, as well as an AECC representative who travelled specifically to attend the event.

Honorary mentions were also given to the group of businessmen who have remained loyal to the complex during all its years of activity, and have played a fundamental role in the creation of the centre´s stylish image, which has always been based on ´modern elegance´. On this list of professionals who deserved a mention were: José Figueroa Cuenca, Montserrat Pijoan Vidiella, Lars Broberg, Jim Broberg, Michael Foltinger and Fausto Martínez, among others. The ex-mayoress and newly-elected town councilor for the Partido Popular, Ángeles Muñoz, also received a special mention, as she has always been linked to the facility, as an owner of one of the stores, and having attended medical consultations on the premises for several years, before dedicating herself fully to politics. As Muñoz could not attend the event due to another commitment, she thanked the centre and sent a representative to accept the mention on her behalf.

After the official welcome to the ceremony took place, Oscar Fernandez Bracho, URBEMAR representative and current manager of CENTRO PLAZA, made a small speech. He wanted to emphasize the centre´s “excellent commercial functioning”, highlighting that 95% of the stores on the premises are currently occupied by both tenants and landlords and that the number of different sectors that the mall deals with today has reached over twenty. He stressed that CENTRO PLAZA “(…) made a substantial improvement to the thriving area of Nueva Andalucía 25 years ago (…) because, in his opinion “(…) by building this facility, the founders supplied this area with a commercial activity that was lacking (…) “. Finally, he praised the architectural style chosen in the beginning; it was left to the hands of the creative Javier Banús who also wished to say a few words to the audience.

Descending from a long line of builders, (his uncle accomplished the world-famous Puerto Banus), Javier Banús was in charge of creating CENTRO PLAZA´s architectural design, which has become a symbolic icon for elegant urban planning in Marbella. The creator chose a timeless architectural style with open spaces, making the most of the light and natural beauty in the area. With its privileged location as a vantage point, CENTRO PLAZA boasts plenty of scenic views, looking out onto Marbella´s maritime bay and the unique outline of ‘La Concha’ mountain.

In a more private setting, Alfonso Fernández talked to some journalists about the roots of the project, which became a pioneer for Spanish shopping centres in the 1990s. “It wasn´t an unplanned idea that happened by chance, but one that came from experience, and from finding out what Nueva Andalucía really needed. (…) I laid out the plan for the centre with the top floor dedicated to offices and the rest to shops and services”. He continued to point out that CENTRO PLAZA “has been, is, and will always be one big commercial and professional family” and that the key to its success has been “(…) the sum of many talents and efforts over these 25 years”. He concluded by saying, “we must also thank the customers, both residents in Marbella and tourists, for choosing to use our shopping centre´s products and services every day”.

The event´s master of ceremonies was Carlos García Perujo, who is in charge of Marketing and Communication at CENTRO PLAZA. He lead the most official part of the function, which included various speeches and the projection of a company video, before moving on to cocktails and live music, at a soiree that was full of touching moments.

CENTRO PLAZA DATA. It opened in 1990 with an area of 16,000 m 2 and more than 300 parking spaces, and continues to have, essentially, the same spatial dimensions today. The area in which this shopping centre has made noticeable growth is in its online services (for both the stores and customers) with the creation of a blogging website, social networks and internal newsletters. In 2015, it has 124 shops and offices in operation, which means that a total 95% of its stores are occupied, and includes over 20 commercial sectors and businesses. From beginning to end, it has always played a fundamental role in the interweaving of businesses at the Costa del Sol. 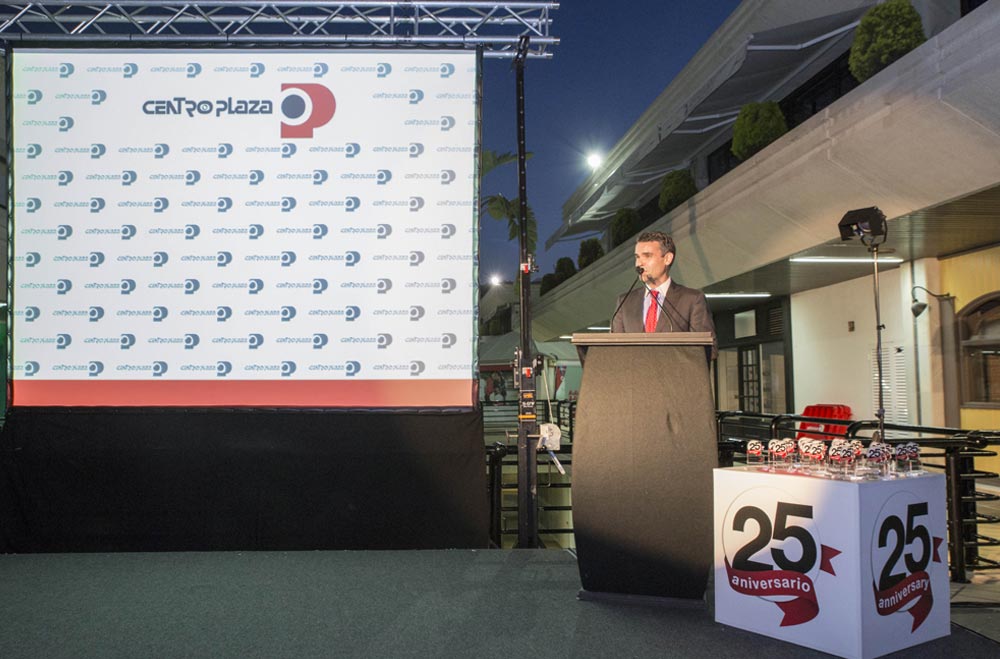 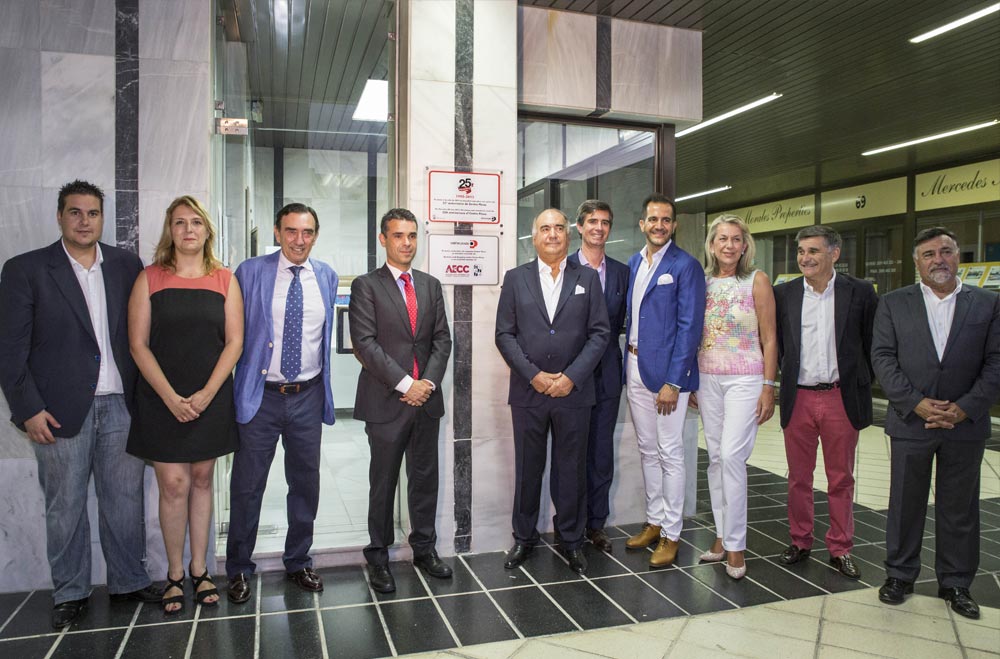 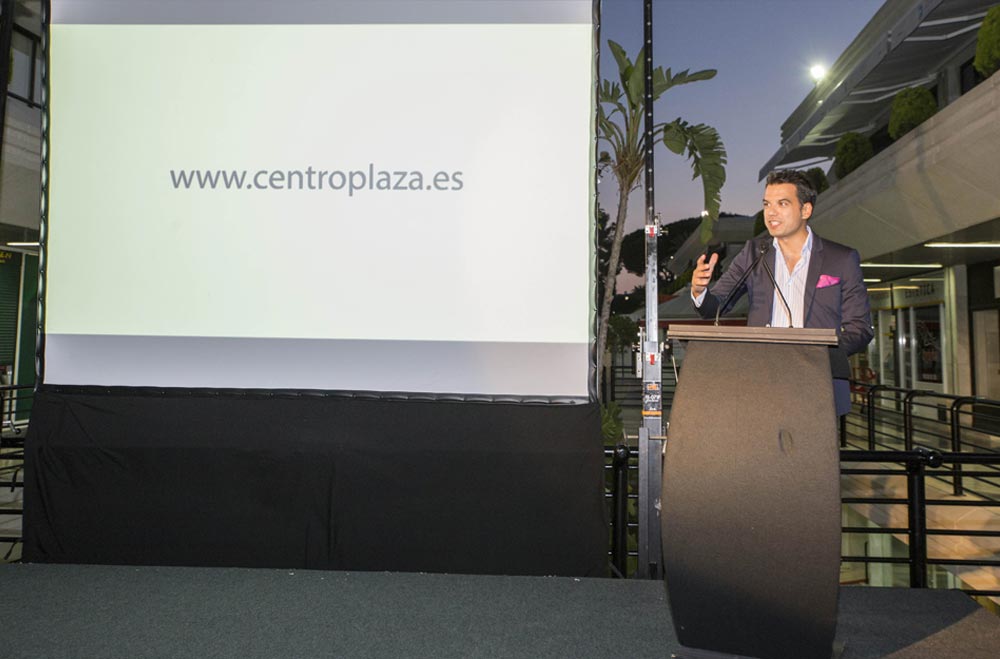 Centro Plaza is a member of :