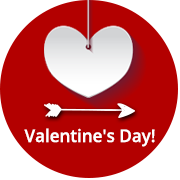 Show your love with… Centro Plaza!

Its 14th February and theres nothing better than celebrating Valentines Day in Centro Plaza. Owing to the great variety of shops, restaurants and establishments, its a sure thing for having a great day with the person you love.

In case you are not aware, the celebration of Saint Valentines goes back to the 33rd Century D.C.

According to some versions, Valentine was a Roman priest who challenged Emperor Claudio II´s order to prohibit marriage between young people, as it was thought that single men with no family were better soldiers for battle, as they did not have so much to lose.

The priest believed that it was totally unjust and married these couples in secret, which ended with him being imprisioned and finally martyred and executed on 14th February year 270. His remains are kept in the Basilica of Termi, where couples marry to this day in remembrance of this Saint.

Today, Saint Valentines is celebrated in many ways around the world. In USA and Canada, children exchange greeting cards with their friends and colleagues at school, a tradition which is also carried out in some parts of Spain. In Italy for example they have Saint Valentine Banquets and in Denmark its customary to send pressed white flowers to friends, which they call snowflakes.

In Spain, many couples give each other presents, go out for a romantic meal and spend the evening together, Saint Valentines being a special date in the calendar for many spanish couples.

At Centro Plaza we know how important this day is for you, which is why we invite you to pay a visit to our website and see beforehand all the possibilities we have on offer, which, no doubt, will leave you even more in love…

Would you tell us something?

Usamos We use cookies on our website to give you the most relevant experience by remembering your preferences and repeat visits. By clicking “Accept”, you consent to the use of ALL the cookies.
ConfigurarACCEPT ALL
Manage consent

This website uses cookies to improve your experience while you navigate through the website. Out of these, the cookies that are categorized as necessary are stored on your browser as they are essential for the working of basic functionalities of the website. We also use third-party cookies that help us analyze and understand how you use this website. These cookies will be stored in your browser only with your consent. You also have the option to opt-out of these cookies. But opting out of some of these cookies may affect your browsing experience.
Functional
Functional cookies help to perform certain functionalities like sharing the content of the website on social media platforms, collect feedbacks, and other third-party features.
Analytics
Analytical cookies are used to understand how visitors interact with the website. These cookies help provide information on metrics the number of visitors, bounce rate, traffic source, etc.
Advertisement
Advertisement cookies are used to provide visitors with relevant ads and marketing campaigns. These cookies track visitors across websites and collect information to provide customized ads.
Necessary
Necessary cookies are absolutely essential for the website to function properly. These cookies ensure basic functionalities and security features of the website, anonymously.
SAVE & ACCEPT